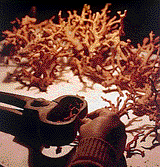 MINERAL, VEGETAL OR ANIMAL NATURE?
Coral was known and appreciated in ancient times. We find traces of it with the Sumerians, Assyrians, Phoenicians, and with the Celts too, who had a real passion for the “red gold”. Fifteen centuries before Christ coral was already considered, on the asian markets, one of the most precious exchange products, in the place of coins.

I was lucky enough to see some jewels made in China around 1200 / 1300, which I could buy and take to Italy. Well, these jewels were made of Mediterranean coral!

Since the ancient times coral has been the object of arguments about its nature. The ancients thought it was vegetal, a sea plant, because of its tree-shape. The fact, though, that once extracted from the sea it would harden and petrify, and could be worked as a stone, let the alchimists state it was of mineral nature. Nor the legend about the coral origin helps us solve the question: the nymphs, amazed by the fact that the branches change into stone when in touch with the blood of the Medusa, enjoy dipping more branches in the blood and throwing them into the sea. We could go on and on with mythology, but whith no success.

The question if coral was of mineral or vegetal nature remained unsolved. We have to wait until 1723, when doctor Andrea Peyssonel from Marseille, after the studies made by the neapolitan alchimist Filippo Finella puts end to this argument asserting that coral is an animal! Coral is in fact a colony of small coelenterata looking like little polyps, that with their calcium carbonate secretions form a solid structure in which they live and reproduce.
From the scientific point of view coral belogs to the anthozoans (from the greek Antos Zeion: flower-shaped animal) and within this family to the octocorals(from the number of their tentacles).

Talking about coral we must pay attention not to mistake the corallium subgroup (that we work) for the corals forming the reefs of the pacific ocean atolls: these are corals, or better, esacorals, that we don’t work, and that are used as home decorations. These are the famous madrepores in the beautiful colours (white, red, blue) that for sure many of you have in their sitting-rooms. Well, better to know that the harvesting of these madrepores is forbidden!