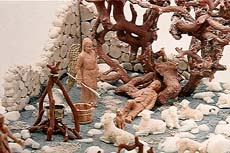 There is something fascinating, something charming that involves you on an intellectual level, but most of all something involving mood, sensations, when you come in touch with coral.

The more you get to know and appreciate it, the more this mysterious power captures you. This power, definitely exerted by coral, is what the ancients used to call Fascinatio. We have mentioned coral’s mysterious and ambiguous origin. Admiring its deep red, you could believe you’re really seeing the Medusa’s blood in it. Also it is to mention that coral, in the christian eschatology, associated to the figure of Christ, will stand for the blood of Passion and Resurrection. There are famous and unforgettable paintings of the Italian, Flemis or German school showing Jesus in the arms of Our Lady, who is wearing a coral necklace with a pendent sprig.

If we take a look at the past, at the usage and customs of peoples, we will often find coral. Just think that from the Alexandrine alchimists to the Arabians, many peoples appreciated coral for its exceptional healing skills. Opportunely mixed with other elements, it cures head disorders, like cephalea and insanity, blood diseases stopping haemorrhages; and also stomach and heart disesases; it avoids abortions, heals impotence; it clears scars, it keeps leprosy, cancer, herpes and all ulcerations away.

How not to mention Zarathustra, who praised its apotropaic properties (from Greek: Apo trepo: I keep away from), or Dioscorides, an athenian doctor of the first century a.C., who praised coral’s healing properties, and more: Pliny the Elder, who mentioned coral, in his Naturalis Historia, as a cicatrizant element?
This is why since ancient times, wearing a little piece of coral is like having an amulet.

The more the merrier! We are presently still selling the waste material of coral manufacturing to India – we know that it is used to prepare medical remedies, mainly aphrodisiac products. The writer hasn’t had the chance to personally test this property, but some reliable indian friends confirm it is prodigious!

Common people meanwhile, are pleased with using coral as a protection against evil eye, just thinking “It’s not true but I believe it!” Round a nice lady’s neck it leaves unexpressed unavowable desires, continuing the belief that it is a symbol of fertility. We mustn’t forget its use – since ancient times – in amulets and in the “magia sexualis”. And the little coral horn is nothing but the temperate version of the amulet par exellence: the coral phallus. The famous coral horn: make a present of it, with no restraint! Even the most skeptical person will be glad to receive it!

Remaining in Italy, let’s think of the many regional costumes like those of Campania, Abruzzi, Upper Adige, Latium, Sicily, Sardinia etc., which are rich of coral. The wet nurses of Ciociaria used to receive, as a gift for having milked a baby, a coral necklace, traditionally faceted, together with matching ring and earrings. Coral is also present in the customs of Hungaria, Holland, Russia. Coral is heavily present in the spanish customs and jewels, more precisely in Andalusia. Special attention must be paid to the Nigerian phenomenon – Benin actually – where coral, manufactured in cylinders of all sizes, from few millimiters to many centimetres, has always been a very important part of the traditional customs that kings and dignitaries wear during official ceremonies.