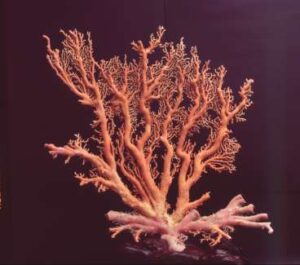 The most frequent question we are asked is “what is the most valuable coral quality?”

It is not easy to answer this question, because of the supply-and-demand law. There were periods in which a very well-known coral type, the “angel skin” of a very delicate pink, was considered of poor value, while today it is one of the most precious – and rare – types.

Just think that our great-grandfathers used to call it “boké”, as we still do; in japanese “boké” means stupid, meaningless. When we think of coral, we mainly imagine red coral. Too many elements – as we have also seen in the mythology section identify coral with the red colour.

Well, when we talk about red coral, we mean Mediterranean Coral (Scientific name: “corallum rubrum”). It is present in all the Mediterranean area, particularly concentrated in the seas of Sardinia, Sicily, Calabria, Campania, Latium, Tuscany, Liguria. In some of these areas, the excessive exploitation together with pollution have made it very rare.

In the remaining mediterranean areas, we find it in Greece, Jugoslavia, Corsica, France, Spain and the in Morocco, Algeria, Tunisia. The coral of these areas is always of the same type: Corallium rubrum. It does not always look the same though: the size varies, as well as the depth of the red. So we find that the coral harvested in France, Corsica, Spain is small, and of a beutiful dark red, while the coral harvested in Northern Africa, mainly in Algeria and Tunisia is big, light red, and extraordinarily comacat.

What about italian coral? The most famous is the one from Sardinia: lively red, nice, big: it is not rare to find branches of 1000/1500 gr. o weight, 40/50cm high. Coral is not only harvested in the Mediterranean, but also in the seas of Japan, Taiwan, Pescadores Islands, Midway, up to Hawaii, where more or less 15 years ago a huge coral reef, onion pink, of poor quality, between 1000 and 2000 m. depth. (hence the name “deep sea”. The asian coral colours vary from white to deep red, but the most common colour, heavily present on the market is salmon pink. The branches of the eastern corals are stronger than the mediterranean ones, and can even reach 70/80 cm of height. Bigger ones are very rare.

Rajola is presently showing, at the Oceanografic museum in the Principality of Monaco, a japanese coral branch of excellent quality, Satsuma; it is about 1 meter high and weighs 10 kg. Following you will find the descritpions of the coral type we most frequently work. Not all of them are important though.